Blood on the Land

View source
watch 01:36
We're Getting Mutants in the MCU - The Loop
Do you like this video?
Play Sound

Jeb Drummond is a murderous sheep herder that has Adam taken hostage to try and force Ben to sign over a large section of Ponderosa land to him.

Jeb Drummond is driving his herd of sheep across the Ponderosa when the Cartwrights ride up to him. Ben politely tells him to leave. Jeb asks for permission, he's willing to pay. Ben doesn't want the money, he wants Jeb and his sheep to go. Jeb starts to get a little angry and puts his hand on his rifle. Adam, Hoss, and Joe all pull their guns. Jeb backs down and asks if he can camp out for the night. Ben sighs, but agrees.

The next morning, Jeb has decided he's not leaving. He tells his young herdsman, Billy that they're going to take the land. He wants Billy to take two men and watch for the Cartwrights. They're to kill the first man they see. Billy can't believe Jeb would kill a man for no reason.

Adam comes upon Wheeler and Collier just as the two have decided to quit Jeb. Adam, gun drawn, orders them to drop their guns. Wheeler spins with rifle in hand. Adam shoots him. Collier rides away. Adam checks on Wheeler and just sighs that it came to this.

Collier returns to Jeb and tells him that Wheeler is dead. Jeb is angry that Collier didn't kill Adam, but he has a plan. He just needs to get the herd into a draw.

Ben is furous that Jeb didn't leave. Adam thinks they should get the sheriff and let the law handle it. Ben tells the boys to get their guns. Adam reluctantly joins them.

The Cartwrights arrive at the draw and are suspicious. Adam says they could hold their ground and starve Jeb out. Joe would rather ride in and get it over with. Ben doesn't want all four riding straight in as easy targets. He sends Hoss and Joe one way while he and Adam approach from the front. A shootout ensues and Adam is captured by Jeb and his men.

Back at the ranch, Ben is blaming himself for Adam's predicament. Ben admits Adam was right, but when Hoss suggests that next time they'll let the law handle things, Ben is upset. Ben tells Joe to get the sheriff.

At the camp, Jeb's decided he doesn't want to just cross the Ponderosa, he wants the land for himself. Billy asks how he's going to do that. Jeb gestures to Adam who's bound. He says that if you get a man in his soft spot, you can squeeze anything out of him.

Billy takes food to Adam. He asks why Adam didn't shoot him when he had the chance. Adam just says he couldn't. Adam asks how Billy came to be with Jeb. Billy explains Jeb saved him from being hung. He owes Jeb. Adam says that doesn't mean he has to be like Jeb.

The next day, Ben and Hoss meet Jeb as he's driving his herd. Adam is tied up in the back of a wagon. Ben offers himself in Adam's place. Jeb doesn't care, what he wants is the Ponderosa and hands Ben a paper to sign it over. Adam leaps off the wagon and tackles Jeb, but Ben and Hoss don't have guns. Billy holds a gun on Adam and Jeb is mad.

Billy admits the Cartwrights haven't done anything to be killed for. Jeb angrily tells him that you have to take what you want. Jeb complains that he should've let the men hang Billy for taking the three horses. Billy never told Jeb that the men were looking for three horses and now realizes it was Jeb who originally stole them. He didn't kill the men to save Billy, he killed them so they wouldn't catch Jeb. He doesn't owe Jeb anything. So as Jeb moves forward, Billy pulls the trigger.

As Billy is leaving the Ponderosa, Ben offers him some land to homestead.

"Well Pa, the way I look at it, if a man expects to get ahead in this world, he's got to use his brains instead of his back."
―Adam Cartwright[src] 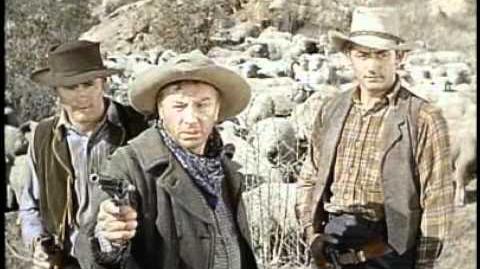