Joseph "Little Joe" Francis Cartwright is the third son of Ben Cartwright and the only common child of Ben and Marie Cartwright.

Joseph Cartwright was named after Marie Cartwright former husband Joseph "Big Joe" Collins. He has little memory of his beloved mother, and was under five when she died in a horsing accident, one he would mirror years later when his horse Cochise falls at the ranch.

Little Joe received his nickname because compared to his brother, Hoss, he was little in comparison. Joe likes playing checkers and poker, he also likes making bets that end up with hilarious results.

"Little Joe" was the only Cartwright born on the Ponderosa, unlike his other family members. He was the third biological son of Ben Cartwright. Joe enjoys reading detective novels, and also loves to laugh, which is contagious to anyone near him. His trademark horse, Cochise, often fondly called "Cooch", is a black and white pinto. Joe is very fond of his horse. Little Joe is also not known to be one to back away from a fight or a challenge, as his hot temper sometimes takes over and clouds good judgement and common sense. However, he seems able to recover from any fight either unscaved or, from that a bullet wound with nary a scratch.

Little Joe appeared in 416 of the 430 Bonanza episodes which means that he was only missing in fourteen episodes.

The role of "Little Joe" Cartwright on Bonanza was played by actor Michael Landon. 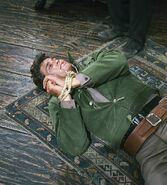 Retrieved from "https://bonanza.fandom.com/wiki/Joseph_Cartwright?oldid=19023"
Community content is available under CC-BY-SA unless otherwise noted.