Ben and Adam are in jail, about to hang for a crime they didn't commit. Joe and Hoss must find out why the witnesses have perjured themselves before the execution takes place. They receive help from an unexpected source, a drifter called Lassiter.

Adam and Ben are in jail, accused of murder and waiting to hang on testimony of a witness, the dead man's daughter. Joe and Hoss ride in to help, and Ben asks them to talk to the accuser, Sally Byrnes, to revoke her testimony. Ben also asks them to put something in the newspaper to change public opinion, and to get a petition going for a stay of execution. Meanwhile, a stranger rides into town.

After a brief scuffle with Joe in the livery, the stranger goes over to Sally Byrnes' restaurant and boarding house to get dinner. While he's there, Joe and Hoss show up, trying once again to reason with her, but she won't hear of it. She is bitterly angry, and expresses to the stranger her thankfulness that the Cartwrights will finally get what they deserve.

The stranger, Lassiter (because he's from Lassiter, Kansas), has his own reason for showing up at the hanging. He believes Ben might be the one he was hoping to avenge for the death of his father. However, he realizes that Ben is not the man he's hunting, and instead takes a liking to Ben when he overhears him telling Joe and Hoss that there must be no violence.

Unfortunately, the townspeople are cowering due to the threat of a gang whose leader is responsible for the death of Sally Byrnes' father, as well as another man. No one will sign the petition out of fear. The newspaper editor is roughed up with his office ransacked when he attempts to insert the article defending Ben and Adam. Lassiter shows up at the last second when Joe and Hoss have to stand up alone to the gang of thugs.

Lassiter talks to Sally one more time, as he knows the woman is attracted to him. She recounts her story of the night her father died, saying that Ben and Adam had accused him of thievery, and she saw them kill her father from the kitchen window. Lassiter points out that the window is filthy with dirt, and it would be hard to see through.

Ben and Adam are marched up to the gallows. Meanwhile, Lassiter describes the horrors of a hanging to Sally. As he goes into detail about it, she breaks down, rushes out into the street, calling for them to stop execution, admitting that she didn't see Ben and Adam kill her father.

The murder posse turns on Lassiter, who by a series of well-time evasive moves manages to shoot them all, one by one, until the sheriff says, "That's enough killing" as the last one dies.

Ben and Adam are free to go, and Lassiter leaves as well. They try to persuade him to stay, but it is evident that his mission is clear to him: he will avenge innocent men in cities wherever he can find them. 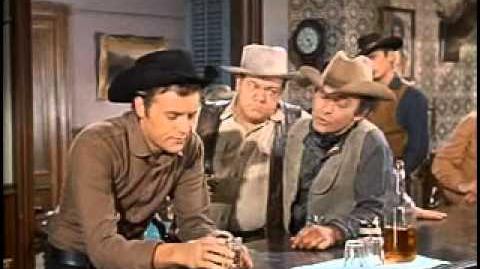