Bonanza Wiki
Register
Don't have an account?
Sign In
Advertisement
in: Bonanza episodes, Season 1 of Bonanza, Romance episodes,
and 2 more

Lord and Lady Dunsford arrive at the Ponderosa to visit their old friend Ben. Adam finds himself the object of Lady Dunsford's attentions when she deems him to be a braver man than her husband.

Ben is excited about a visit from an old friend, Lord Marion Dunsford and his wife, Lady Beatrice. Immediately upon arrival, the British blue-bloods are harassed by a bully by the name of Belcher. While Lady Beatrice watches, her husband is pushed around. Finally, Adam shows up and intervenes, driving Belcher away.

Dinner that night is full of reminiscing about old hunts between Ben and Marion, spurred along by Beatrice. She pressed her husband to talk about the old glory days, although he'd rather not. Beatrice also makes eyes at Adam, and after dinner kisses him on the lips, even as her husband and Ben are approaching. When Marion calls her on it later in their bedroom, Beatrice asks him why he didn't bother to stop Adam from kissing her. He has no reply.

The next morning, relentless Beatrice prods Marion to go hunting for mountain lion with Adam. Beatrice insists on coming along. Meanwhile, a group of renegade Indians, led by the bully Belcher, attack and kill a settler. His grandson witnesses it and reports it to Ben, Hoss, and Joe at the Ponderosa.

On the hunt, Adam spots a mountain lion and drives it out so that Marion can have a shot. Marion freezes on the trigger and Adam is forced to shoot the deadly cat himself. Beatrice watches with disdain for her husband, and wanton admiration for Adam. Marion confesses to Adam that the only reason he hunts is for the sake of his wife, whom he loves very much. He wants to please her, but for the past five years, the drive in him to kill game has diminished.

That night, when the camp is asleep, Beatrice tries to seduce Adam. He rebuffs her advances, and asks why she is trying so hard to hurt her husband. Beatrice claims he is not the man she married, and she is compelled to drive him to be that man again. Adam tells her that she's clinging to an image of a man, not the man himself.

Later that night, their camp is attacked by Belcher and the renegades. Adam is wounded in the arm with an arrow. Lord and Lady Dunsford and Adam are taken hostage. Belcher insults and makes a pass at Beatrice but Marion doesn't stop him knowing that Belcher would kill him. Beatrice's disgust for her husband's meekness enlists her to play along with Belcher, to the extent of sharing a drink with him. Marion offers ten thousand dollars to let them go. Belcher knows that the Cartwrights would be after him as soon as the deal was made. He instead offers to trade his squaw to Marion for Beatrice and challenges him to a knife fight. Marion doesn't accept. Adam later tells Beatrice that if she really is that cold, then she and Belcher deserve one another.

Marion seeks Adam's advice on what to do about Belcher, and Adam tells him that to go after him would be to seal Marion's death. However, when Belcher again goes to grab Beatrice, Marion is driven to fight him. The two go hand to hand until Belcher knocks Marion over and then holds a knife to Marion's throat. From his position on the ground, Marion is able to grab and trip one of the Indians guarding Adam with a gun. Adam catches the gun and shoots Belcher dead. At that opportune moment, Hoss, Ben, and Joe arrive and the renegades flee.

Back at the Ponderosa, Beatrice takes a moment from nursing her husband to explain to Adam that their marital romance is restored. Adam deduces correctly that it happened when she felt Belcher's knife at her throat, and she realized what true terror was. He tells her not to forget the importance of that lesson.

"Adam Cartwright. The man with all the answers."
―Beatrice Dunsford[src] 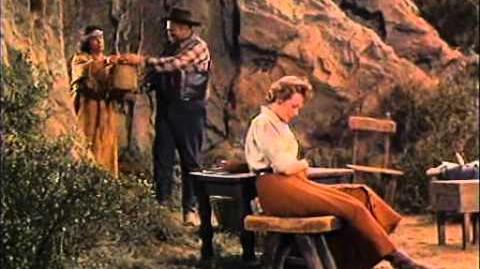