The Cartwrights construct a grist mill to help neighbor Tom Edwards, a disabled man who bitterly blames Ben for his condition. Tom is being manipulated by hired hand Ezekiel, who's not only cheating him out of his money, but also intends to steal his wife.

The Cartwrights' neighbor Tom Edwards has lived as a paraplegic, ever since an accident involving Ben Cartwright and a gun. His ranch is going to waste. His wife Joyce is a longtime friend of Ben, and Ben decides to help the Edwards couple by making Tom a business proposition: the Cartwrights will build a grain mill on Edwards' land.

In return, Ben only wants his investment money back, plus fifteen percent. Tom and his hired hand Ezekiel are suspicious of Ben, but Tom agrees to the deal. The Cartwright men build the mill, but tension begins to rise when Ezekiel makes comments which rekindle Tom's suspicion.

Did you know?[edit | edit source]

"Three fine sons. They could be half your life."
"Only half?"
"Sons can't be everything."
―Ben and Joyce Edwards[src] 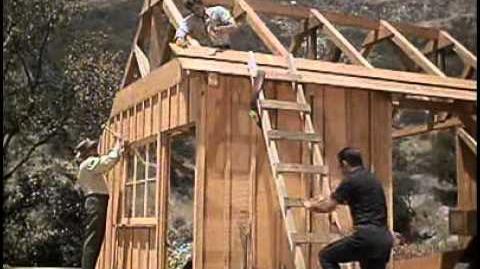 Retrieved from "https://bonanza.fandom.com/wiki/The_Mill?oldid=19232"
Community content is available under CC-BY-SA unless otherwise noted.