Charlie Trent was an Army scout, now is the town drunk. Hoss helps him regain his self-esteem when he encourages Charlie to lead a gold-bearing troop through the desert where there's very little water.

Captain Pender, leading an Army wagon train carrying gold, stops in Virginia City for supplies. Captain Pender fires their scout, Cutter. He needs to hire a new scout. A friend of Hoss, Charlie Trent, once scouted for the Fremont Expedition. But now is a drunk because on one mission, he lead the Army into an ambush and nearly everyone died. Pender remembers Charlie as a scout, and desperate for a guide offers the job to him. Charlie agrees only if Hoss will go with him.

Cutter has a small gang and they had planned on stealing the gold once they got in the desert. Cutter thinks this is even better. All they have to do is let Charlie lead the wagon train, rob it, and kill everyone. People will assume that Old Charlie led the party and got lost in the desert and they all died of thirst. No one will know Cutter and his men made off with the gold. So they ride ahead of the wagon train.

Hoss has dumped out all of Charlie's whiskey and is forcing him to continue. He believes Charlie can do it. No one knows the desert better than Charlie. Charlie leads them to the first of three watering holes. Before they drink, Charlie notices a dead hare. He tastes the water and knows it's been poisoned. They cut rations and move on for the second hole.

Charlie isn't sure where it the second watering hole is located. Charlie plans to ride ahead and when he finds it, fire three shots in the air. The party trudges on. Eventually, they hear the three shots and run to the water hole. Before they drink, Charlie tells them this one is poisoned too. One soldier doesn't believe it and dives in. A few minutes later he's dead. The Captain has to decide whether to turn back or go on. He opts to go on.

They know now that someone is ahead of them, poisoning the water holes, but they don't believe the third will be poisoned until the last moment. After all, those men will want the water for themselves. Charlie wants to scout at night by himself. He says if he finds the hole and if the water is clean, he'll fire three shots, pause, then fire two more. Hoss insists on going too.

Cutter's men are eager to steal the gold. At the third watering hole they're lying in wait behind some rocks. When Hoss and Charlie arrive, they take them prisoner. Cutter demands to know how many men are left and what the signal is to bring them. Hoss won't say. Cutter waves a bottle of whiskey at Charlie, who decides to talk. He tells Cutter the signal is three shots, so Cutter fires three times. The soldiers hear the three shots and realize it's a signal to turn north out of the desert because there's danger up ahead.

Charlie's enjoying his whiskey proud of himself for fooling Cutter, knowing the army won't be coming. He saved the Army and the gold. Hoss worries what will happen when Cutter realizes the wagon train isn't coming. However, the wagon train does come. Cutter only sees three soldiers and suspects the other two are sneaking up behind them. He leaves one man to watch Hoss and Charlie, while the others split up. Hoss and Charlie manage to overpower their guard and the Captain arrives with only a few losses. With clean water, the Army wagon train is able to make it out of the desert and Charlie has redeemed himself.

"I'll cut your liver out! And a man don't live long without a liver, that's a pure medical fact!"
―Lewt Cutter to Captain Pender[src] 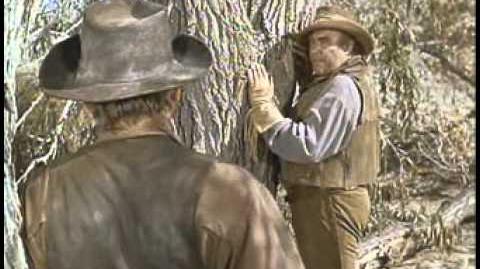